I ordered Absolute Black Granite Flamed and Brushed Tiles [http://www.toppstiles.co.uk/tprod45709/absolute-black-granite-flamed-and-brushed-tile.html] based on a sample in store.

The sample looked like "Topps Good" below.  After it was clear that what was delivered was not like the sample I returned to look at the display item it had been replaced.  This was the same for many stores in South London (I visited a number of them).  The "diagonal banding" was more evident on the new display models. 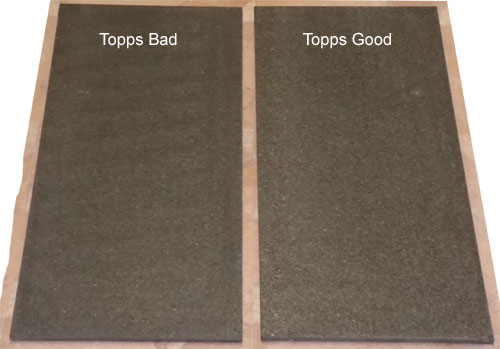 After treating the tiles as instructed it got even worse:

I would like to hear from anyone who finds that look appealing, or upmarket.

At no stage have Topps claimed that they were selling a second or reject item.  Indeed the item is presented as a premium tile in store.

I contacted them to try and work out what had happened

"From your photograph and comparing it to the photo we have on the website, the patterning on this particular tile seems to match what we have pictured. Any further information would help me to continue investigating your concern"

"... buying team, whom have been in contact with the suppliers themselves. They have informed me that the band like appearance is simply the structure of the material showing through the tile after flaming & brushing. It is not caused by the process, it just highlights the different densities and natural variation in the stone."

WHOAA, hang on, I'm not a Geologist, but nature doesn't often make lines like that.  Indeed no granite I've ever bought has exhbited that pattern.  The only time I've seen that in rock is from blasting holes!!!

To get some idea of how "normal" this was for the product I found someone else who does the most similar formfactor tile and bought one. 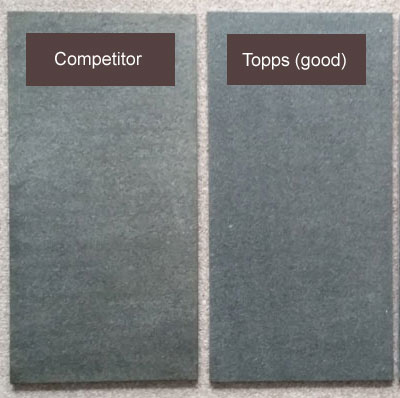 it's clear that the banding exists on the competitors tile, more obviously than the "good" Topps tile, but is not nearly as obvious as the bad ones from Topps.

It is clearly possible to produce and supply better than what I had.

Topps did offer to accept any remaining tiles for return, but would not guarantee that the ones re-supplied would not have precisely the same defect.  Typical of someone who has not understood the problem. They have repeatedly denied despite having seen these photo's that the tiles supplied were in anyway defective.

I feel that any one who works in the industry (and indeed I spoke to someone who did) would have, when faced with the evidence and manufacturers response, have pursed the supplier on a low grade product with a deficient manufacturing process.

To make I point I wrote:

I got this response:

Well, no it isn't, the only NATURAL thing here is the stone.  This effect / defect is not NATURALLY in the stone.  The TILE is manufactured by man, from the NATURAL stone that DOES NOT have this defect.  The defect (or effect if you want) is a result of the process the stone undergoes in creating the product.

I didn't return the tiles for re-issue, I would have lost time and had the same problem due to TOPPS incompetant handing of the query and their supplier.

I didn't return the tiles for credit because the only alternative I could find (which would have been a perfectly acceptable product had I used it from the start) was fullt rectified and slightly thicker.

If you visit this page I would be please to hear your opinion.

I think there is clear evidence that the best advice is to STAY AWAY FROM TOPPSTILES IF YOU'RE BUYING NATURAL STONE.

My argument here is with perceived incompetance at the headoffice.  The staff at my local store have been nothing but 100% helpful.  I have recommended friends from my local pub to the store who have bought tiles.  The problem is the attitude at the headoffice.

BACK TO: Bad Service

A really good example of what appears to be incompletance surrounded by "yes men"...  Logic can not prevail.

Failure to satisfy Customers is a guaranteed outcome.

The crux of my issue is that what was supplied was not as advertised and the defect was not obvious until the tiles will treated in accordance with Topps instructions.

At that point roughly 40% of the tiles could not be returned.

For the 60% that could be, since there was no admitted defect, and Topps refused to inspect before shipping to my local branch there was every reason to suspect that returning would just waste time

I did explore other suppliers, but unfortunately same size, same thickness was not an option.

My argument here is with perceived incompetance at the headoffice.  The staff at my local store have been nothing but 100% helpful.  I have recommended friends from my local pub to the store who have bought tiles.  The problem is the attitude at the headoffice.