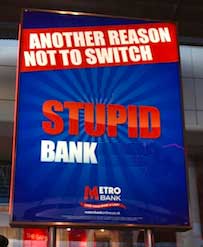 Metrobank looks good from a customer facing point of view, very good in fact, unfortunately my story is evidence that internally it has the same failings as the larger (traditional) Banks.

The Financial Ombudsman *knowingly* lacks the expertise to properly investigate claims involving internet services. It could be argued that the Ombudsman could handle purely financial issues without an understanding of the Internet and still have a (marginal) reason to exist.

A Bank however offers services over the internet as a common carrier.  It can not lack this expertise and believe that the resultant ignorance allows it to safely operate in the 21st centrury.  Thus Metrobank either lacks these skills or they are deliberately witheld from the problem solving process.  Both are "bad".

MB had agreed to send me an email reminder when a statement was generated.  I only received this once.  At first there was amicable discourse and I was patient (for 3 months) whilst they inefficiently addressed the issue.

I received a notification once when the issue was "fixed", but it "broke" again the next month.  Metrobank eventually insisted that the issue had been fixed when it clearly hadn't and decided to end correspondance without any proof that they had fixed either the fault or the process that had produced it.

Bear in mind that by this time the issue had been open for 6 months.  It had already been "fixed" once.  It was not a trivial issue resolved in a day that could be easily forgiven.  It was a persistent issue that had not been solved, or even correctly addressed.

There was an undertaking (with proof) they would send me an email.  No email arrived and no proof has ever been furnished by Metrobank that any of the emails they claim to send ever left their sphere of influence.  The "proof" the Ombudsman accepted is laughable and underscores the point I'm make about .

A Google Search will reveal the relevant documentation - whilst there is no requirement in any RFC pertainting to SMTP (that I'm aware of) for an [SMTP] queue ID to be exchanged, it is considered best practice that when an email is handed from provider to another the former logs the latters [SMTP] queue ID. In the one instance where I did receive this, the various ids are clearly generated.

The very point of the [SMTP] queue ID is to resolve where the fault is in an allegation of non delivery.

It would seem that when I alleged non delivery (and SPECIFICALLY mentioned [SMTP] queue ID  on a number of occasions) that this issue would have been quickly resovled by confirming that the email HAD left MB's Sphere of Influence by supplying MY ISPs [SMTP] queue ID.

It seems the only conclustion to draw is that Metrobank indeed either lacks these skills or they are deliberately witheld from the problem solving process.  Internet and Email are a fundamental part of modern communication.

Wake up Metrobank.  I hope someone else with similar issues will contact me since I believe that those of us who know better need to protect people who simply won't have pursued this at any of the various hurdles placed in the path of resolution.

In addition to the above

There is also some evidence in the content of calls and emails that systems were allowed to "go live" without sections (customer facing services) of the bank that *could* be affected begin properly appriased.  This seems to indicate a failure in project management or change control to correctly identify stakeholders or communicate.

Why Didn't I pursue this in Court?

After the Ombudsman failed to properly comprehend the issue (and an appeal failed) I realised this matter would require expert witnesses to resolve fairly and correctly.

NOTE: The evidence the Ombudsman used to reach their decision does not include any reference to an independantly verifiable fact and shows clearly how the lack of knowledge around Internet technologies lead to an injustice.

Expert testimony could only be presented in a court.

I was quite prepared to lodge a small claim, but the costs I could claim would be at most paper and postage for 2 years.  Legal advice I received was that this would be considered a waste of court time.  I could probably also have claimed specific performance of the original contract.

A social / SEO campaign seems the only way for me to try to connect with other MB clients who may have had a similar problem and see if there is some way to get justice served.

BACK TO: Bad Service

What is wrong with UK Banking?

These are reports of the natural outcomes of failures in Banks project and systems management:

Evidence in this case: