The initial mould for the grip

I tried using cling film as a barrier between the warm plastic and the dash, but the Thermoplastic just bonded with it, no damage to the dash, but I wasn't sure if I would have a problem since I'd introduced another plastic.  Attempt #2 used cooking foil as a barrier.  That worked perfectly. 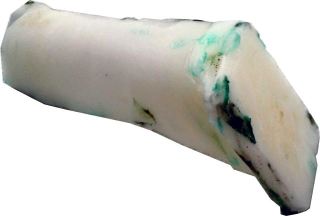 This was surprisingly easy, whilst the plastic was malleable I just blobbed plastic on the front bit and used a piece of wood to create a flat surface.  I tried to make it with 90° corners, but realised that was never going to work so I concentrated on getting it an even tickness by sandwiching the lump between to pieces of wood and then waited for it to solidify.

The photographs here show the mount after I cut the excess plastic off the sides and around the platform with an angle grinder. It's not briliant, but it does create a tidy cut.  It also heats the plastic (but only along the cut) which means bits of moulten plastic going everywhere.

The last "construction" activity on this project was to take a piece of hard plastic (donated by some panel I'd salvaged) and bond this (by heating both) to the platform section and trying to bond with a little deformation as prossible... I did need to re-heat and straighten this. 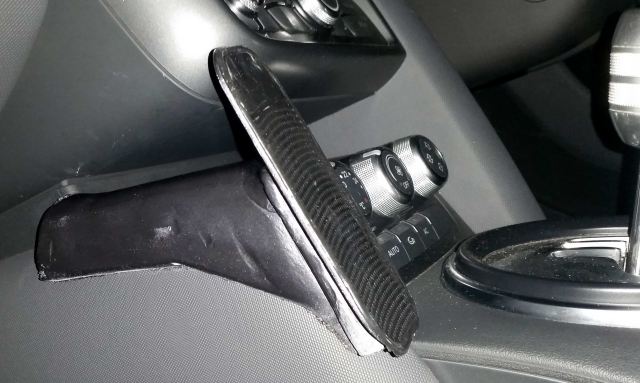 It was clear that sanding by hand was too time consuming and using the angle grinder (due to the melting) would not give a smooth finish.  I did the rest of the finishing with a rough disc-sander.

Before final smoothing I sprayed with a primer a few times (so the underlying plastic is not smooth), I flatted the primer coat and then sprayed colour twice and fairly quickly after the clear coat. 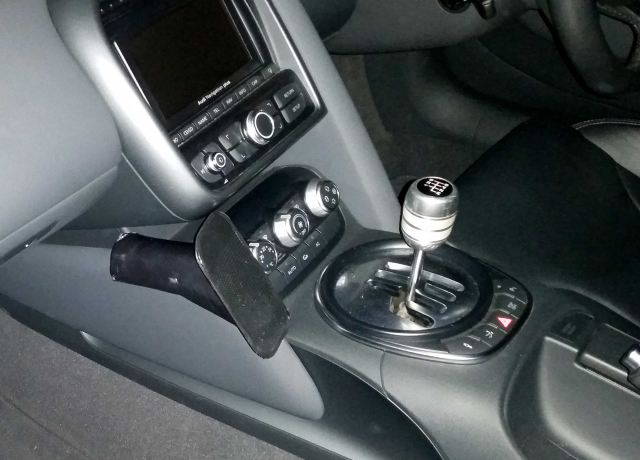 The final bit on this was the silicone "rubber" that sticks my mobile to the platform and some rubberly matting glued underneath to help the unit "grip" R8's trim.

UPDATE: After a few "spirited" drives it seems the unit grips the R8's trim well enough at this stage that no further work is necessary!

Using Thermoplastic to create a cheap, but useable phone mount for the R8.

I have a Brodit clip for my Volvo C30 that allows me to non destuctively mount a panel just near the passengar's knee / gear knob area. I prefer this location to something stuck to the window with a suction cup.

A device on the window is easy to see, but will partially obstruct view and is against (during day time) a very bright background.  At night time it's a source of illumination where you really don'e want it.

Also, if you need to touch it at any point (to change navigation, say) leaning forward over the dashboard is not natural whereas a tap with the left hand (at a safe moment) is as natural as changing gears.

I've been unable to find somehting similar for the R8, and after meeting consumer accessible "Thermoplastic" I decided to have a go at creating one.

There is really only one place to mount this, again, just below and to the left of the main screen with in easy reach of "gear knob hand".